The report allows you to pull out certain users by defining data segments. The following segmentation categories are available for the report: traffic sources, users, and devices.

The report is formed for a specific time period. The default period is one week, but you can set the value manually. To set a range of dates, click the calendar drop-down

. The selected time interval can be grouped by hours, days, weeks, or months.

The data in the report can be grouped by:

The following metrics are available for analysis: 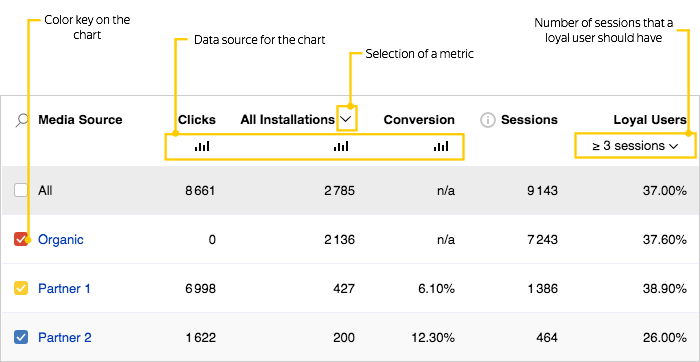 Clicks
The number of clicks that users made.
Installations

By default, the report shows the "All Installations" metric. In this column, you can select one of the following metrics:

Average revenue per paying user for the selected period. It is calculated as the ratio of revenue to the number of users who made a purchase.

You can add the following metrics to the report:

To show the Revenue metric, select it in the drop-down list.

You can add up to 5 events to the report to monitor the information about an event in the context of the traffic source.

The following metrics are available for the specified event:

To show the event information, select it in the drop-down list. Sending an event should be configured when the SDK is initialized.

You can export data by choosing an item from the Export dropdown list above the chart. The data is exported based on the selected report settings: segmentation, grouping, and time period.