For a better understanding of how advertising works in the App Store search, we talked with the founders of AdAhead, Alexey Adamovich and Yurу Listapad. AdAhead is a platform for managing and optimizing Apple Search Ads campaigns. Alexey and Yuri have already tested the AppMetrica and Search Ads integration with one of their key clients.

– Is it true that Apple Search Ads don't work in Russia yet? Which regions can you buy ads for?

Alexey: That's right. Users with a Russian Apple ID won't see these ads yet. Search Ads are served to users from the USA, Canada, the United Kingdom, Australia, New Zealand, Mexico, and Switzerland. The list of countries will be expanding. However, Russian advertisers who have an international market do advertise in the App Store.

– What about the quality of traffic?

Alexey: Since this is native traffic and it is directly associated with the keywords for a specific app, the quality of traffic is high. Publishers are happy because the traffic is maximally targeted.

Yury: It is worth noting that this is an expensive channel. Highly targeted traffic doesn't come cheap, a priori. The CPI starts at $0.1 and can go as high as $10-15, depending on the targeting.

When the competition appeared, the CPI increased 3.5 times to $0.7.

Targeting a competitor's brand will cost more. We had a case where there wasn't any competition for the keyword, and the CPI was $0.2. When the competition appeared, the CPI increased 3.5 times to $0.7.

When we talk about specialists who are buying the Search Ads channel, we mean marketers who are primarily engaged in analytics. The most successful advertisers are able to assess their audience and distribute the budget based on ROI.

Structured analysis using tracker data can show the quality of traffic and the return on investment.

Just going and buying traffic will work for some, but for most advertisers, the traffic will be too expensive. Structured analysis using tracker data can show the quality of traffic and the return on investment.

There is no doubt about the quality of advertising in the app store, but it is important to find the right keywords, icon, screenshots, and description. Users go on their device, search for what they want to find, and get what they were looking for, without being distracted by related suggestions (what is known as "laser targeting").

The standard auction system of "bid higher and get more traffic" doesn't work here. It only makes sense to buy relevant search queries, and there are a limited number of them. No matter how much you increase your budget, you won't get more searches than App Store users actually made.

Alexey: The algorithm evaluates how relevant the app is to the specified keywords, and also considers TTR (TTR is the same as CTR, just using the term "tap"). The ad unit consists of promo screenshots uploaded to the App Store when the app is published, or the icon plus the first few lines from the description. 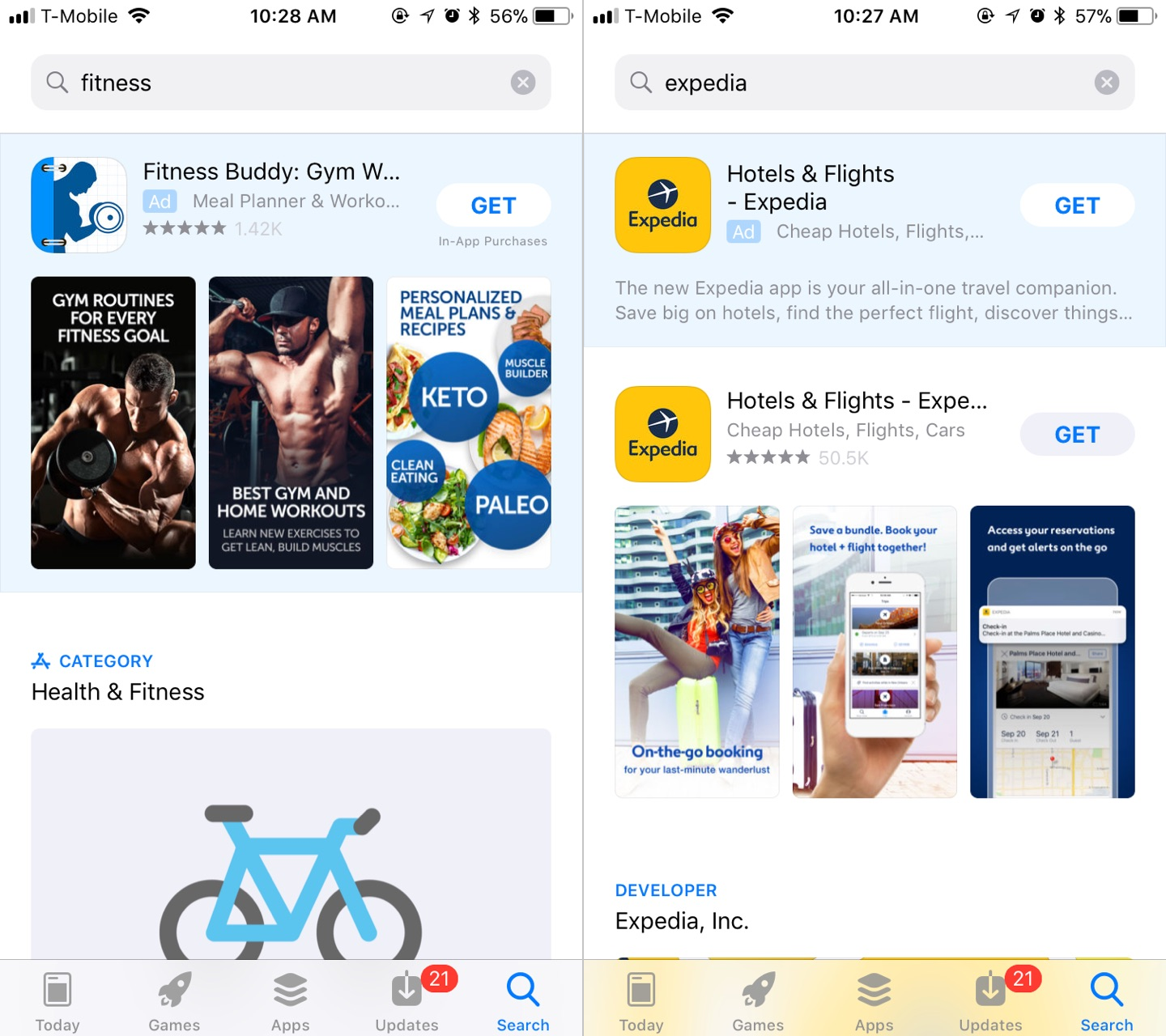 Yury: Apple's vice president of advertising Todd Teresi, who oversees Search Ads, claims that the system sees far more metrics than we can imagine. We believe that the Search Ads algorithms account for user behavior when deciding whether to show a certain app in an ad unit.

It most likely uses all the data to generate a coefficient for the app and the keyword. And the value of this coefficient affects the distribution of traffic. Like Facebook’s – "Think beyond the install".

– Let's move on to the technical questions. How does Search Ads index keywords? Do you need to enter keywords before starting a campaign?

Yury: Search Ads offers a list of initial keywords that the system believes are relevant. Information is pulled from the app's metadata in the App Store: the name, category, keywords, and information about similar apps. It's possible that the system even scans the app description.

– Are you saying that all the keywords that we and some of our competitors use are available? What are the options for fine-tuning campaign settings? What should I do to get more accurate targeting?

Alexey: When creating a campaign, the user selects a list of keywords and targeting combinations such as region, gender, and age. Then they add their own keywords, up to 2000 per ad group. 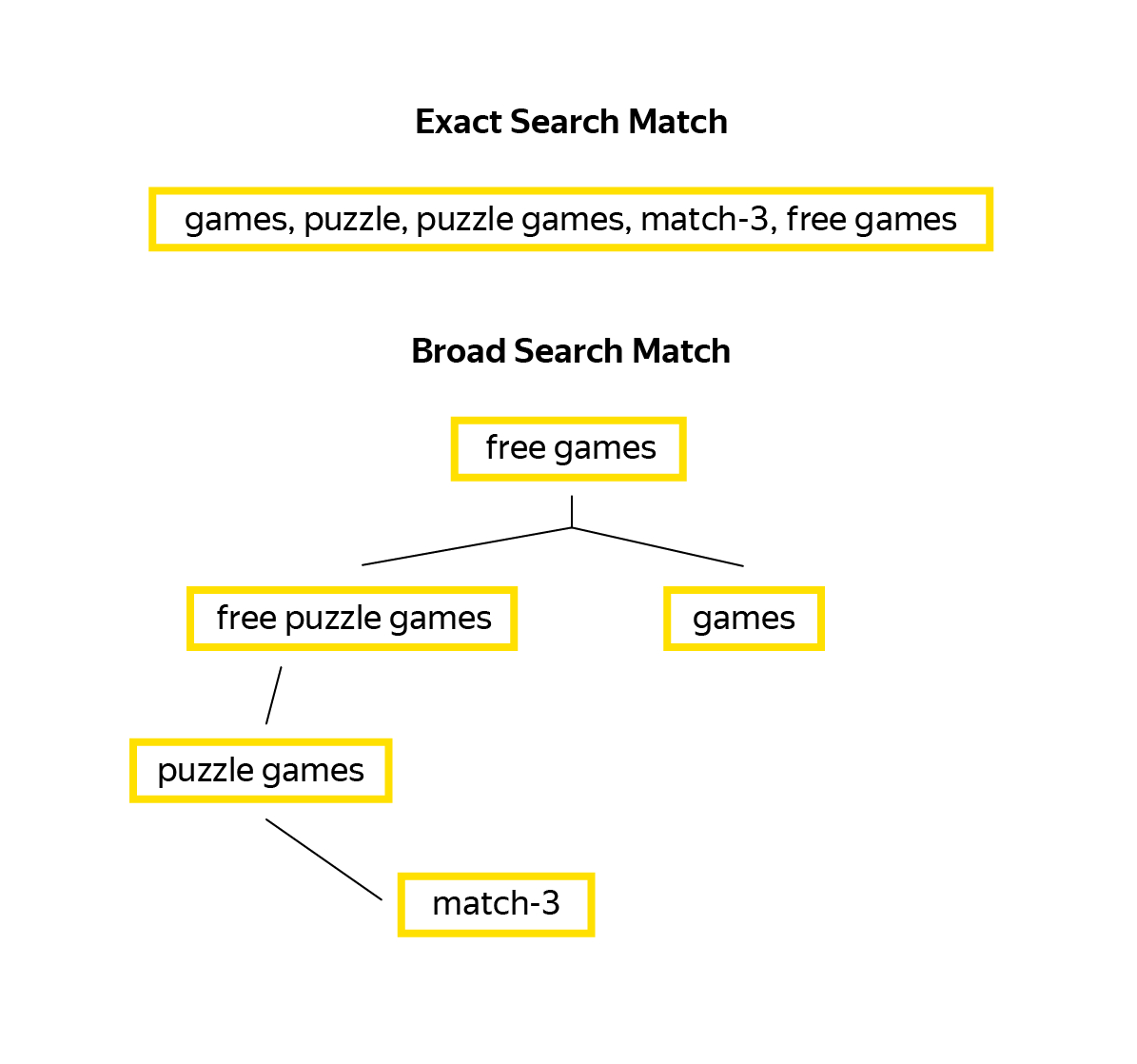 – How can I avoid spending money on users who would have come to the app for free? Are these people excluded from the campaign audience? Can I specify a particular app category?

Alexey:  You can't choose the category. There is also an issue with targeting by demographics and location: don't forget that approximately 30% of users don't transmit their IDFAs to ad networks. If you choose "males aged 30-40 years from New York," you actually lose a portion of the potential audience. Apple knows about these people, but they don't allow targeting. Work with keywords. Stop words will help eliminate impressions for search queries that the app gets organic traffic from.

If you don't buy organic traffic for the Yandex.Music app while targeting searches for Google Music, Deezer and other music apps – your competition will.

Some clients target both their own brand and the competition brands, even when they have the top position by keywords. Major market players have to do this because they are fighting for each user. If you don't buy organic traffic for the Yandex.Music app while targeting searches for Google Music, Deezer and other music apps – your competitors will.

Users will also search for apps that are near Yandex.Music in the results. Sometimes the brand is even lower than its competitor for the keyword. Game developers frequently face this problem: the results may show several similar games in the "match-3" genre, and the user doesn't really care which one they install. They are most likely to choose the first one in the list. The names are also often similar, which can be confusing.

But you also have to exclude keywords. For the search term "book," the App Store will display ebook readers. But it will also show booking apps for travel and accommodations. These cases should be avoided.

However, at some point, the TTR will signal to the algorithm that potential users of your app are looking for a reader, not a hotel. Impressions will fall and the CPI will rise.

That's why Apple Search Ads are not in a hurry to enter the Russian and other similar markets. There are difficulties with semantics, like the well-known problem with differentiating Russian words like "zamok" (castle) and "zamok" (lock).

– The case with "book" shows that advertisers need to be able to buy traffic for a keyword, but restrict it by category. This way the ad will be shown with readers, but not with travel apps.

Yury:  This is where the tracking in AppMetrica comes in. You can see what users are doing after installing the app by a certain keyword. If you can see that the traffic isn't reaching your goals, remove the keyword from the campaign.

10-30% of users install an app and then just forget about it.

Alexey:  Another advantage of tracking in general and in AppMetrica in particular: Apple attributes installation by the click on the Install button. In AppMetrica, attribution takes place on the first launch. This is an advantage because statistics show that 10-30% of users simply forget about an app after the install: they close the App Store and never open the app. 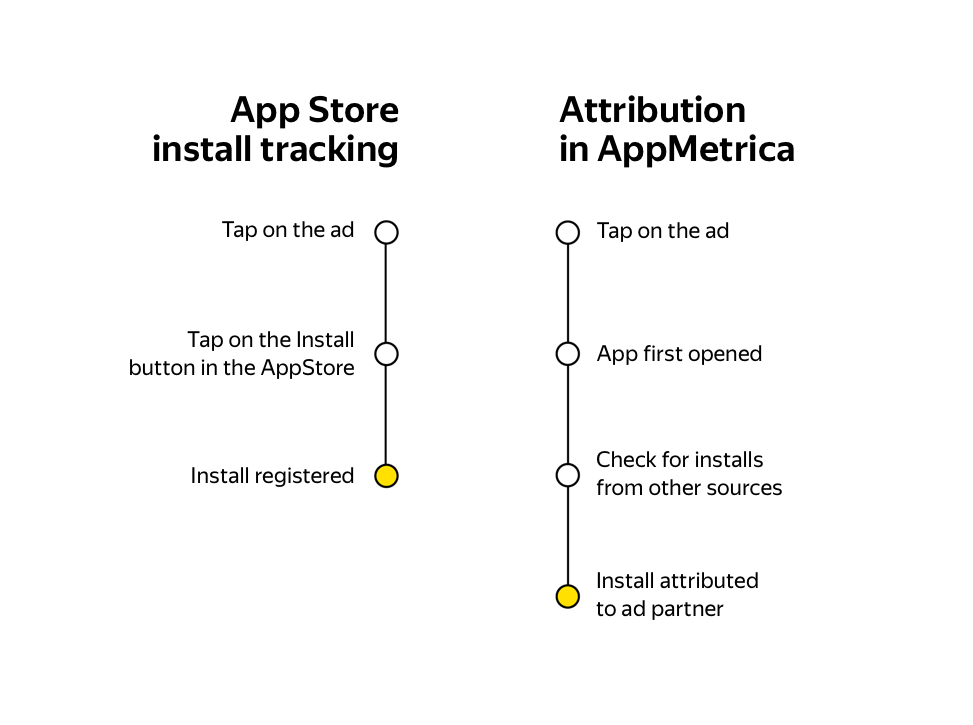 Yury: Apple is planning to give developers access to the app's open rate sometime soon, and then we'll be able to get more accurate data.

TTR and CR are the main factors that the system uses to optimize a campaign. As they increase, more traffic goes to the app for those keywords. A single app will never get 100% of the impressions for a keyword, but with a high TTR and CR, the volume can reach 50-60%. It all depends on how many apps want the ad slot. Ideally, traffic is evenly distributed between all the contenders.

Alexey: Traffic from Apple Search Ads has a positive side effect: the app grows organically and climbs the ranking of keyword searches. At some point it might even come out on top of the list. However, it will take weeks to get to the top position. It's a long process because your competitors are pursuing the same goal.

Once a Search Ads campaign had been running for 7 days, the app reached the 20th place in search results for the keyword.

Case study: A photo storage app that we promoted wasn't even making it into the top 200 keyword results. A normal user would never scroll that far down the list. Once a Search Ads campaign had been running for 7 days, the app reached the 20th place in search results for the keyword.

– So the algorithm helps quality apps increase their ranking, rather than the ones with a bigger advertising budget?

Yury:  The advertiser doesn't have all the information about user actions in the app, so we don't know for sure. But according to Apple's vice president of advertising, getting money from advertisers is not their primary goal. The company is placing their bets on pulling the best quality apps to the top of search results. Search Ads won't give all the impressions to the big players who are willing to pay the most. Traffic is distributed between all bidders.

— You said that the algorithm learns during the course of the ad campaign. So it selects the best users to show the ad to, based on the TTR and CR?

Alexey:   I'd say that it selects keywords from the list that will have the best conversion rate. If the TTR and CR fall too much for a keyword, the ad gradually stops being served for it.

Again, Search Ads is more focused on small publishers. The system is designed so that you can launch an ad campaign in one click, even without adding the keywords. Apple is positioning Search Ads as a tool to enhance discovery in the App Store. The aim is not only to make money (though they intend to do that too, of course), but also to offer users a variety of apps with the highest possible quality.

So your TTR may rise while your CPI drops!

AdAhead is a startup with Belarusian roots that has been developing a platform for automating and optimizing Apple Search Ads campaigns since the end of 2016. The system combines data from Search Ads and an attribution platforms in a unified interface. It automates everyday operations based on keyword performance metrics.